Darius I, or Darius the Great, was the fourth Achaemenid emperor, son of Vishtasp, wife of Atossa and son-in-law of Cyrus the Great.  He ascended the throne in 522 BC, with the help of several elders of seven Persian aristocratic families, killing Gaumat the Magian. He then suppressed internal riots. He strengthened the imperial rule and added several lands to the empire. The construction of Parseh (Persepolis) began during his reign.

Another task of Darius the Great was to dig a waterway that connected the Red Sea to the Nile River and from there to the Mediterranean Sea. His tomb is in Rahmat Mountain in a place called Naghsh-e Rostam in Marvdasht Fars (near Shiraz). After Cyrus the Great and Cambyses, all of Asia (Asia Minor) was considered part of his realm.

After the reign of Darius, all the provinces revolted, and Darius and his allies suppressed the nine kings who fought with him during 19 battles. The first outbreak occurred in Elam. In Persia, a claimant called himself Berdia, the son of Cyrus. The fact that the rebels did not always stand together at the same time and did not have a common goal or alliance with each other was a major factor that helped Darius repel the rebellions.

Darius divided the lands of Iran into several parts and appointed a mayor for each. Among Darius’ actions in this regard is the creation of a royal road that connected Sard, the former capital of Lydia, to Susa (the ancient city) of the Achaemenid capital. Another way related Babylon to Egypt.

In order for the army to reach the required places sufficiently and quickly, Darius had organized an army called the Immortals Army, because he never reduced their number and immediately filled the vacancies. The number of this Immortals Army was ten thousand. 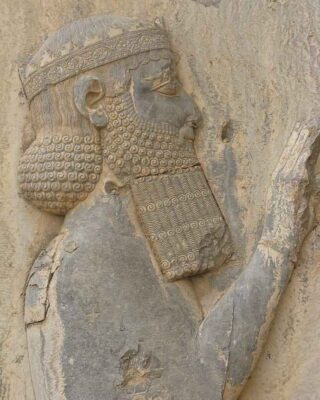 After informed about the defeat of Persia in the battle of Marathon, Darius the Great prepared a delegation against the Greek states under the command of Datis. The expedition with the men and the ship took three years to prepare, and the uprising in Egypt began. This revolt greatly reduced Darius’ health and prevented him from commanding another of his armies until he soon died. In October 486 BC, Darius’s body was embalmed and buried in a rock tomb that had recently been prepared for him. Xerxes, the eldest son of Darius and Athos, succeeded to the throne. Xerxes became one of the most powerful Achaemenid emperors.