Bote Jeghe, the pattern of the bent cypress (a sign of humility) which is a sign of Iran and Iranians. Bote Jeghe is a pattern that has always been considered in the history of traditional arts and has a great share in decorating all kinds of handicrafts, especially fabrics, carpets and kilims, pottery tiles, shawl weaving, textiles, inlays, weaving and embroidery, cashmere (Termeh) in various sizes and shapes.

The origin of the Persian Bote Jeghe design is tied to the sacred fire, to the pine, to the palm, to the almond, to the pear, as well as to the leather bag, in the form of fists, and even to the grooves that happen to be the Jumna River on its way from the Kashmir Valley to India have been simulated. Its beginning is considered to be Elamite-Assyrian art and finally it is Achaemenid art. Many believe that the pattern of Bote Jeghe is rooted in Persian, which was a Zoroastrian symbol. A cedar tree that is a sign of Iranian freedom and has bowed its head in humility. Others consider the cypress as a sign of Iran’s resistance against the hurricanes of events and the curvature of the cypress as a sign of its damage in these hurricanes. Others consider it a survivor of the survey, which was a sign of their freedom during the Mazdakian era, and after the defeat of Mazdak, he bowed his head in shame. Dehkhoda considers Bote Jeghe to be made of bird feathers, which was installed on top of the hats of the kings of Iran.

This Pattern later became very popular in the East.Excavations in the Pazyryk Valley were also made in 1949 by Russian archaeologists, along with a Pazyryk rug and other items, a leather thermos was obtained which was decorated with a pattern of Bote Jeghe. This is the oldest document of this pattern that history shows.

Bote have been associated more with trees and plants, and all of the above are designs that are part of the myths and beliefs of the ancient Iranians and under the influence of culture and social conditions of centuries later, have changed form and shape. Some believe that this pattern is the embodiment of Indian plants and as a result, they are convinced that Bote Jeghe came to Iran from India, but there is a lot of historical evidence that the Bote Jeghe was originally a cypress.

The Bote that used in the arts from the eighth millennium BC to the Achaemenid period are mostly almond bushes (Bote) and a small number of them are curved. One of the found specimens, which is perhaps the first Bote observed in the history of Iranian art, the specimen found in the body of Elamite Assyrian carvings belongs to three thousand years BC and a vase can be seen from which two idol-like leaves hang. 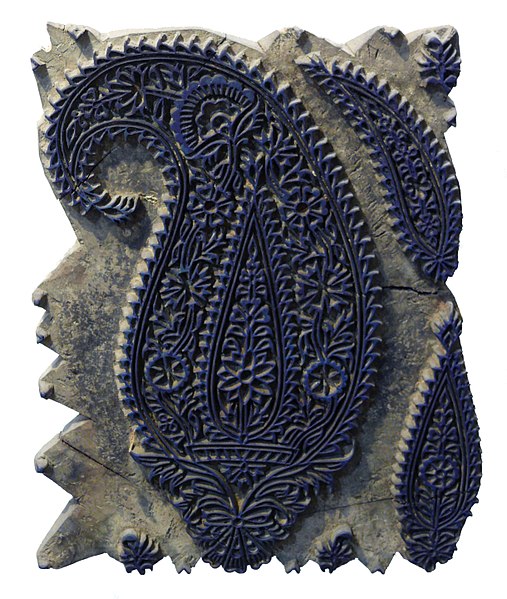