Isfahan Chehelstone Palace is one of the historical monuments of Isfahan. The forty-column palace, which has an area of 67,000 square meters, began its construction during the reign of Shah Abbas I and a mansion was built in the middle of it. Shah Abbas I built a pavilion in the middle of the garden, which formed the original core of the palace, which included the middle hall of the forty-column palace and its four-cornered pavilions.

During the reign of Shah Abbas II, the building was completed and general changes were made to the existing central building, including the Hall of Mirrors, the 20-column Hall, the two large north and south rooms of the Hall of Mirrors, the porches on either side of the Kingdom Hall and the large pool in front of the hall. Mirroring and tiling of walls and ceilings have been added. At first, there were paintings instead of mirrors, but after the palace caught fire and when it was cleared of soot, part of the porch roof was used with silver mirrors instead of mercury.

The central hall of the palace, which was dedicated to foreign guests and personalities of other countries, contains paintings that depict the historical events of different periods. This magnificent hall, which is based on a painted dome with colorful elastics and golden and transparent designs, is considered one of the masterpieces of art of that era. The porch of Chehelston Palace consists of two parts, one of which is based on 18 tall wooden pillars. The four middle pillars are placed on four stone lions and their carvings are such that two lions are shown to a human head. It flowed from the mouths of these four taps and poured into the marble pool of the hall. The other part, which is a little higher, forms the entrance of the hall and in some sources it is called the mirror hall. This part is placed on two columns and all of it is decorated with a wide and elaborate mirror work in which small and well-patterned mirrors are used in the form of mosaics along with tall and brick mirrors. The ceiling of the hall is made of wooden frames in different geometric shapes. The symmetrical image of the marble pool in the middle of the porch can be seen in the ceiling decorations. This symmetry is very similar to the great Qapo porch. Transfer money to Iran, Send money to Iran, نقد کردن درآمد ارزی 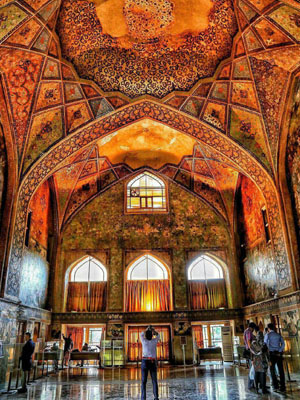