Persian Daf – Where To Buy An Iranian Daf Instrument

Persian Daf – Where To Buy An Iranian Daf Instrument

The Daf, is a large Kurdish/Persian Wooden frame drum which a thin skin is stretched on it and played with the fingertips. This instrument is similar to a circle on Iranian percussion instruments, but it is larger and with a lower sound. Daf used in popular and classical music but also used in religious ceremonies among Kurds. The Daf also considered as the national musical instrument of Pakistan. In ancient times, a small Daf or circle made of zinc and brass was called khamk or khumbak.

The instrument is depicted in mesolithic cave painting at Lakha Juar, Bhimbhetka and in Assyrian Empire relief. The Pahlavi name of the daf is dap. Some pictures of dap have been found in paintings that date before the Common Era. The presence of Iranian dap in the reliefs of Behistun suggests the daf existed before the rise of Islam. Shunga art and Mathura art carved panels around 2nd BCE – 2nd CE, also show ancient Indians playing this instrument by beating it with metal or wooden sticks like dholak or simply using their hands. Dafs were part of religious music in Iran much before Sufism.

In Pre-Islamic times, the Daf was present in Iranian and Kurdish music, so that the traces of its rhythms are still present in Kurdish music, but with the advent of Islam, this instrument closed for survival in the monasteries and prayers of Kurdistan and for more than 13 centuries in the monasteries of Kurdistan. He became the companion of the dervishes of Kurdistan and was mixed with their dhikr and sky, so that the dhikrs in each position are accompanied by their own rhythm in the daf, and in other words, each dhikr has its place, which are called Daf maqams. Daf positions in Kasenzani and Ghaderi methods and other methods are from 7 to 10 main positions. This daf sit-in continued until 1974, when it was completed by Mohammad Reza Lotfi and with the efforts of Bijan Kamkar, and in this year, after centuries, it was used in public performances and in non-mystical music.

Nowruz and other festive occasions have been accompanied by daf in Sassanid periods. This traditional or classical music was created by Barbod the Great and was named the khosravani after the mythical king Khosrow. The art of playing Daf in Iranian Kurdistan and other parts of Iran has reached us by the effort of Iranian Sufis; especially in the 20th century. The daf still functions as an important part of Persian art music (traditional or classical music) as it did in ancient times. It successfully encourages many young Iranians to take up learning this ancient instrument.

The history of frame drums based on the ancient times. The persian daf is one of the ancient musical instrument in Iran and neighboring countries.They have strong and dramatic sound with a simple structure and used both in spiritual rituals and entertainment gatherings. Daf instrument is known as one of the oldest frame drums from the ancient history of Asia and Africa. In Sufi culture, they use daf for spiritual chanting and Iranian musicians integrated that successfully in Persian music. The player usually holds the persian daf with left hand (for right handed players). Persian daf has four main techniques. Using these four techniques, all different rhythms and sounds can be produced on Daf. The right hand techniques are called “Tom” and “Bak” and left hand techniques are called “Chap” and “Zanjir”.  In Iran, Sufis use persian daf during their Zikr rituals (spiritual chanting); in recent years Iranian musicians have successfully integrated it into Persian music.

What are the different types of daf?

Solo daf is a model specifically designed for solo performances. The jingles have a high pitched clear sound. It has a higher-tone and a voluminous sound. The soloist plays the instrument easily by relaxed finger movements on the surface.

The skin of the daf might be affected by the humidity because of the natural materials used in the making process. A studio daf is a special model produced to prevent the changes on tightness of skin. It helps to play the instrument for the whole performance without worrying about the changes of the tune.

The bass Daf is a model which is larger and has a thicker skin. This helps it to catch a fuller, deeper and more appropriate bass sound. Treble Daf is another specialized style, designed to catch high notes. They are also suitable for winter performances. 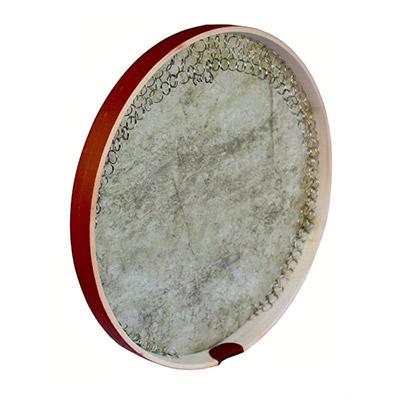 How to Play With Daf?

Hold the instrument in front of your body. Place the left hand at the 6 o’clock position and the right hand at the 3 o’clock. The rings should face towards the player while drumhead faces away. The three beginning strokes are; bass toned “dum”, high pitched tone “tak” and another high pitched but softer and slightly muted tone “ka”. The dum and tak strokes are produced by right hand while the ka stroke is made by the left hand. To create the dum stroke, keep fingertips together in a little arc position and hit the center of the daf with the tips. It will help the daf bounce and creates a deep, bass tone. For the tak sound use four fingers and hit the instrument slightly from the edge. To create the ka stroke, twist your left wrist hit with four fingers slightly from the upper edge of the frame. Playing of the daf involves arms, wrists, hands and fingers working together at the same time. The hands and the wrists help player hold the instrument firmly while fingers creates the sound. At the same time arms get lower or rise up and shake the frame to produce simultaneous movements with the head and the rings. Hand and finger techniques create a wide range of tonal and rhythmic variations.

Where To Buy Persian Daf Instrument

The answer of this question is simple. An Online Persian music Shop is the best choice
But which music website can you trust or which website offers a variety of products at reasonable prices?