Omar Khayyam Neyshabouri who is also called Khayyami, Khayyam Neyshabouri and Khayyami Al-Nisabouri, is an Iranian quatrain, philosopher, mathematician, astronomer and quatrain poet in the Seljuk period. Although Khayyam’s scientific status is superior to his literary status, his fame is due to the writing of his world-famous quatrains. Although Khayyam’s quatrains have been translated into most living languages, his reputation in the West owes much to Edward Fitzgerald’s translation of his quatrains into English.

Omar Khayyam was born in Neishabour in the fifth century AH. He studied jurisprudence in the middle of his life in the presence of the successful Imam of Neyshabur; He studied hadith, commentary, philosophy, wisdom and astronomy. Some have written that he learned philosophy directly from the Greek language. Around the year 449 AH, under the auspices of Abu Tahir, the Judge of Samarkand, he wrote a book in Arabic on the third degree equations, entitled Risala fi al-Brahin al-Masal al-Jabr wa al-Maqbalah, and since he had a good relationship with Khawaja Nizam al-Mulk al-Tusi, this book After writing, he presented it to Khajeh. After this period, Khayyam went to Isfahan at the invitation of King Jalaluddin, the Seljuk king, and his minister, Nizam al-Mulk, to take charge of the Isfahan Observatory. He resides there for eighteen years. Under his leadership, Zij Malekshahi was prepared and in the same years (about 458) he set the plan for arranging the calendar. During this period, Khayyam served as an astronomer at the court, although he did not believe in astronomy. In the same years (456) Khayyam wrote his most important and influential mathematical work entitled Essays on the Explanation of Euclid, in which he described parallel lines and the theory of proportions.

One of the most prominent works of Omar Khayyam can be considered as arranging and supervising the calculations of the Iranian chronology during the ministry of Khajeh Nizam-ol-Molk, which was during the reign of the Seljuk king (426-490 AH); Khayyam’s calculations in this regard are still valid and are far more accurate than the Gregorian calendar. He was a professor of mathematics, astronomy, literary, religious and historical sciences. Khayyam’s role in solving quadratic equations and his studies of Euclid’s Fifth Principle have recorded his name as a leading mathematician in the history of science. 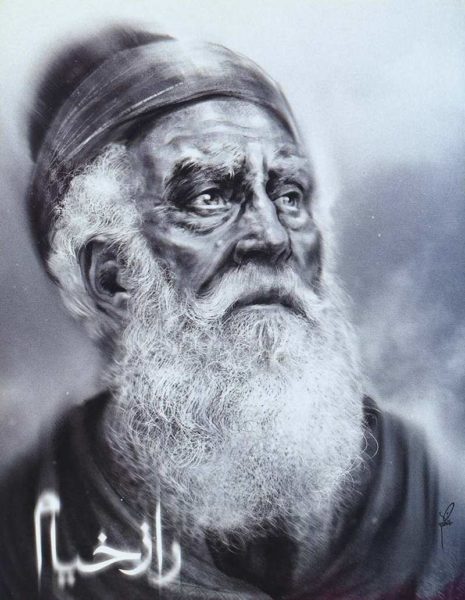 Khayyam’s death is known to have taken place in Neishabour between the years 517-520 AH. A group of biographers also wrote that he died in 516 AH, but after the necessary investigations, it was determined that the date of his death was 517 AH. His tomb is currently located in the city of Neishabour, in the garden where the tomb of the Imamzadeh Mahrook is located. At the time of Khayyam, various Sunni and Shia sects were engaged in principled and theological debates. Different classes of philosophers were constantly accused of blasphemy. Prejudice had gripped society and no one dared to express his views – not even Imam Mohammad al-Ghazali escaped the charge of blasphemy.

Khayyam’s reputation in the West as a poet owes much to the Englishman Edward Fitzgerald, who introduced Khayyam to the world through the poetic translation of his quatrains into English. However, he has included poems by Khayyam in his collection, which, according to Hedayat, are not permissible. Prior to the scientific corrections, there were collections called Khayyam’s quatrains; The collections were confusing and contradictory. The first valid correction of Khayyam’s quatrains was done by Sadegh Hedayat. Sadegh Hedayat believes that Hafez has used many of Khayyam’s metaphors, to the extent that he is considered one of Khayyam’s most thoughtful and best followers.

Rubaiyat of Omar Khayyam or Khayyam’s quatrains is the name of a collection of quatrains prepared by Ghias al-Din Abu al-Fatah Umar ibn Ibrahim Khayyam Neyshabouri known as Khayyam; these quatrains were written in Persian in the fifth and sixth centuries AH and mainly express his philosophical views. During Khayyam’s lifetime, these poems were kept secret due to popular prejudice and were not compiled.

The Divan of Hafez by Hafez Shirazi