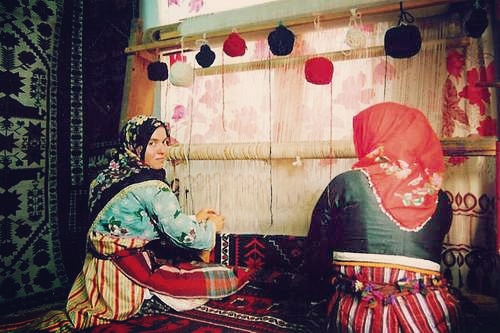 Until a few decades ago, rural and nomadic women wove kilims, gabbehs, jajims, zillows, etc. for their own use, but now weavers of other types of carpets, just like carpet weavers, pay attention to market demand and buyer tastes and weave rugs.

1- Persian Gabbeh Rugs: Gabbeh is a kind of carpet; That is, in addition to Warp & Weft, it also has Lint, and the thickness of the Lint and the length of its knot are much thicker and longer than the Lint of different types of carpets. Gabbeh is a handicraft for nomads. Gabbeh has no pattern and their pattern are mental; and the weaver weaves the patterns of an animal, a person, a tree, or even geometric shapes, depending on her mind or the scene she sees. The size of Gabbeh is usually from one and a half to four and a half meters, and you can hardly find more than this size in the market. Gabbeh is a heavy carpet due to its thick lints and coarse texture, and because its knots are loosely woven, it has soft lints. One of the most artistic types of gabbeh is gabbeh whose lints is made of wool; That is, the weaver weaves Gabbeh with unbleached spun wool. This type of Gabbeh is very resistant to moisture and direct sunlight does not change its color, and of course it is very beautiful.

2- Zilou or Ziloo: Zilou or Ziloo is one of the oldest types of handwoven Carpet in Iran and woven in Meybod. It use as the carpet by Iranians. Unlike other Iranian handmade carpets, which are woven by wool, Zilou is completely plant-based. Zilou does not have lint, so it does not produce aerosols. Physicians insist on using it for the child, elders, and the ones with respiratory disease. As its yarns are made of herbs, cellulose materials and are completely natural, it doesn’t cause skin allergy and it has been recommended for the ones with skin allergy.

3- Felt Carpets: Weaving is not done to prepare felt but is formed by the sinking and sticking of camel wool by rubbing and pressing them together, is another type of carpet. Soap and egg yolk are also used to improve the quality of work. The amount of wool required per square meter of felt is equal to the amount of wool needed to produce a rug, but because the time to produce the felt is much shorter, the price is low.

4- Persian Rugs (Carpets): Undoubtedly, the most beautiful and diverse Rugs are woven in nomadic and rural areas of Iran. Persian rugs or carpets have long been famous and used, as evidenced by the Greek historian Xenophon in his book Cyrus, between 430 and 345 BC: “Iranians spread rugs under their beds to keep their beds soft.” The history of Iranian carpets has many gaps, and at present there is more or less evidence in this field, such as historical and literary evidence or original old paintings depicting old carpets, because carpets, textiles and objects used are much shorter than their lifespan. Other handmade artefacts include glazed pottery or metal. The beginning of classical Iranian carpet weaving dates back to the Safavid dynasty and developed in cities such as Tabriz, Ravar, Isfahan, Kashan, Mashhad, Kerman, Joshaghan, Yazd, Astarabad, Herat, Shirvan, Qarabagh and Gilan, and at the same time the use of Toranj & Lajack designs It became popular in the middle of carpets and rugs. The wool or silk yarns used in Rugs weaving can be dyed with chemical dyes or natural dyes, which obviously make the natural materials used in dyeing more stable, beautiful and improve the quality of the Weft.