The Divan of Hafez by Hafez Shirazi

The Divan of Hafez Shirazi - The great Iranian poet

Divan Hafez is one of the richest books of Persian literature and has the most beautiful poems and lyric poems. Divan Hafez is a poem by one of the greatest Persian language poets, Khajeh Shamsuddin Mohammad Shirazi, nicknamed Hafez. Now, more than two hundred years have passed since the first official publication of this divan.

Khwāja Shams-ud-Dīn Muḥammad Ḥāfeẓ-e Shīrāzī, or Shamsed-din Hafez known by Hafez Shirazi was born some six hundred years ago in southern Iran, but his poems have universal and contemporary appeal. Wherever Persian is known, he is easily recited by both king and common man. Those uncertain about matters of love, fortune, or any other situation open a page of his collection of poems at random and in it see their dilemmas untangled. His turns of phrase have enriched the Persian lexicon and entered everyday language; this has made him Persian culture’s most read, quoted, and revered figure. Reza Ordoubadian’s translations make the poems of Hafez accessible to the English language reader, while remaining faithful to the nuances of Hafez’s language and thought in the original Persian.

Hafez Shirazi or Hafiz Shirazi, during his teenage years and early adolescence, was a baker’s apprentice and made copies of manuscripts. In his poems, Hafez mentions his presence in school, forty years of studying science and grace, morning lessons, and memorizing the Qur’an based on various readings.

Hafez’s reputation had caused the rulers of lands near and far to summon him. Throughout his life, he interacted with many sultans and nobles and accompanied with scholars and poets, and was aware of the situation of Sufis and dervishes of his time. But he never belonged himself to any of these groups because he did not consider any sin heavier than hypocrisy and always attacked the hypocrites in his poems.

Most scholars believe that Hafiz brought Persian lyric poetry to a peak that was never repeated. Hafiz’s poetry has three romantic, mystical and eulogy spaces.

Although Hafiz was a well-known poet in his days, his biography is strangely unknown and hidden, and his contemporary writers or scribes have not provided any information about it.

Hafeziyeh is the burial place of Hafez Shirazi in Shiraz. This building was designed and reconstructed by the order of Reza Shah to Ali Asghar Hekmat, the then Minister of Education, based on a design by Andre Godard. It was hosted by Ali Riyazi, head of the Fars Education Department, and headed by Ali Sami. 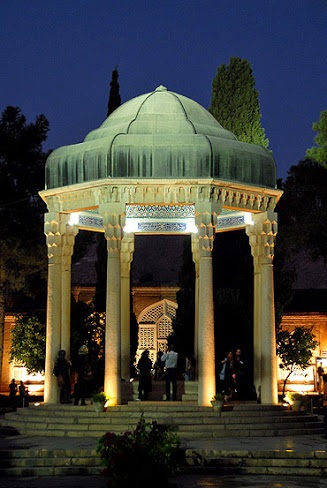 Where to Buy the Divan of Hafez ???

Hafez’s Divan was probably compiled for the first time after his death by Mohammad Glandam. Of course, some unconfirmed reports indicate that Hafez edited his Divan in 770 AH more than twenty years before his death, but there is no manuscript of this version. The English version of Hafez’s Divan is the only translation of a part of the Divan and so far no complete translation of this Divan has been provided. Reza Ordoubadian’s translations make the poems of Hafez accessible to the English language reader, while remaining faithful to the nuances of Hafez’s language and thought in the original Persian.

But one of the best online bookstores that selling Divan of Hafez in Farsi & English is ShopiPersia.com website. Why ShopiPersia !!! ShopiPersia is the largest online Persian Bookstore from the public point and has been operating for almost 5 years. One of the key advantages of this website is the focus on customer satisfaction, which has been very important throughout this activity. ShopiPersia located exactly in Iran, Therefore, they offer diffferent versions of Divan of Hafiz that can not be found in other online and offline bookstore, and their books collection is updated weekly and new books are placed on their website.