Objects made of baked clay are called pottery. Pottery is one of the first and most important man-made inventions. Archaeologists become acquainted with the social and economic conditions of a period or region through pottery. Pottery in Iran has a long history.

Pottery in Iran has a long and brilliant history. About 10,000 years ago, the inhabitants of Mesopotamia turned to agriculture and created a modern civilization in which food production was very important. At the same time, more delicate Pottery with Pea or red colors became popular. Many pottery objects have been found in archeological excavations in Iran, which date back to eight to ten thousand years BC. Some archaeologists believe that pottery originated in Iran; This conclusion has been reached based on the discovered pottery artifacts from related to 8000 BC in Central Alborz and Bakhtiari mountains.

The History of Pottery in Iran

The main characteristic of pottery on the plateau of Iran is red color pottery with beautiful and unique patterns. This type of pottery is completely handmade and is made of mixed clay, sand powder and chopped plant. The potteries discovered in Silk Hill are generally clearer and more regular than other areas, which may indicate the invention of the potter’s wheel.

Coinciding with the third millennium BC, a type of pottery called gray pottery was created, which was the result of working with a potter’s wheel. This type of pottery was baked in large numbers and using more advanced technology in special kilns. The most important innovation in Iranian pottery is related to the Median period, which led to the production of glazed vessels. At that time, pottery was baked more carefully in kilns. 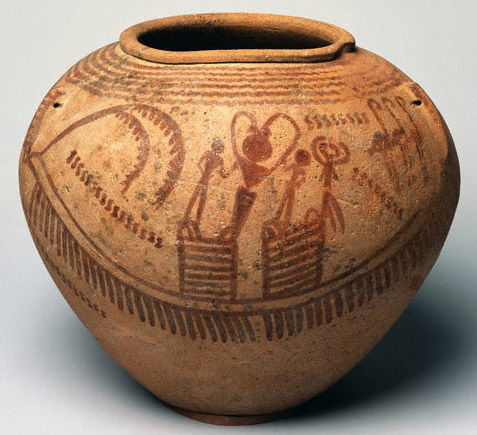 In the late 19th century, a number of clerics and merchants, such as Majdal al-Islam Kermani, Seyyed Jamal al-Din Waez Isfahani, Mirza Nasrullah Malek al-Motalemin, and Mohammad Hossein Kazeruni, founded an association to promote the consumption of local products in Isfahan, but after the Constitutional Revolution, everything was forgotten again, until in 1347, with the approval of the Cabinet, the Handicrafts Center affiliated to the Ministry of Economy took over the task of organizing and coordinating the situation of the country’s handicrafts.

Where to Buy Iranian Pottery ???

One of the best online Iranian stores that selling Different Types of Persian Pottery is ShopiPersia.com website. Why ShopiPersia !!! ShopiPersia is the largest online Persian store from the public point and has been operating for almost 5 years. One of the key advantages of this website is the focus on customer satisfaction, which has been very important throughout this activity. ShopiPersia located exactly in Iran, Therefore, they offer different types of Persian Pottery or Iranian Pottery that can not be found in other online and offline Iranian store, and their Pottery collection is updated weekly and new Samovar are placed on their website.