The clothes of different ethnic groups in Iran are one of the most spectacular and attractive cultures that attract the eyes of every viewer. The different geographical and climatic conditions and different cultures of the tribes living in different parts of Iran have created different features in the clothes of the Iranian tribes, which is a sign of the ancient civilization of that land.

After Cyrus conquered Hamedan, which was the capital of the Medes, he made Hamedan the center of his kingdom and the Persians benefited from the customs and even the dress of the Medes. It seems that women’s clothing during the Achaemenid period was not much different from the Median period. Because there is no image of women in Achaemenid monuments, there is little information about women’s clothing in the Achaemenid period. The freedom of women’s social rights in the time of the Persians was so great that despite the fact that the throne was inherited in Iran and after the death of the Shah, one of his male descendants ascended the throne. In some parts of Iran, the throne passed to his wife after his death, not to his son.

In Parthian times, women’s clothing was a long, floor-length shirt, loose, hemmed, with sleeves, and a straight collar.

Fashion in Iran has been considered from a historical point of view and the innovations and services of Iranians throughout history have been significant to the world fashion industry. According to international historical documents, Iran has been a leader in creativity and excellence in fashion and clothing. Iranian fashion in the “pre-revolutionary” period was covered in world fashion magazines, such as Vogue. Farah Pahlavi was also one of the women promoted by the Shah’s government as a role model. After the 1978 revolution, the mandatory restriction of hijab significantly changed the face of Iranian women’s fashion.

Iranian men’s fashion changed abruptly and greatly from 1304, which was done by order of the then government of Iran, and according to that law, men were required to wear new Western clothing. Iranian women’s fashion has also been much discussed and has been examined by Persian and English, Iranian and foreign language media.

Fashion during the Islamic Republic of Iran

Women’s fashion in Tehran follows Arab fashion close to Syrian and Iraqi. Of course, in recent years, young Iranian women have tried to emulate modern Western fashions. After the 1978 revolution, the hijab became mandatory in Iran, and since then it has been the focus of Iranian women’s fashion. Iranian men do not follow certain indigenous patterns and their clothing has global citizenship. Historically, one of the biggest surprises for Iranian men was the law passed on December 26, 1304, which required Iranian men to wear new foreign clothing such as suits.

The clothes of different ethnic groups in Iran are one of the most spectacular and attractive cultures that attract the eyes of every viewer. The different geographical and climatic conditions and different cultures of the tribes living in different parts of Iran have created different features in the clothes of the Iranian tribes, which is a sign of the ancient civilization of this land.

The land of Azerbaijan has been the cradle of culture, art and beauty since ancient times. Clothing in Azeri culture has been a symbol of the culture and art of this land for centuries. In recent years, the use of local clothing in the daily lives of city dwellers has become less common, but it still retains its color and smell in various ceremonies and rituals. Especially the villagers and nomads continue to appear in the same clothes of their ancestors, which is a sign of courage and bravery. The clothes and fabrics used in this region have a special meaning in their hearts since ancient times. Women’s clothing has all the features of a complete cover. The younger ones wore clothes in cheerful and cheerful colors, with beautiful embroidery and engravings, as well as cashmere and silk. The women of this region wore a hat called “Burke”. Older women often wore a headscarf called a yayliq. The men of this land, by wearing long coats and putting a woolen hat on their heads, along with simplicity in covering, express their high originality. 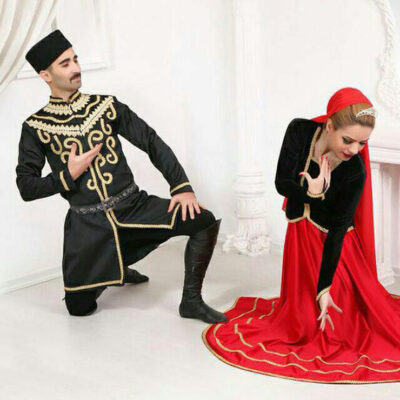 Kurdistan and the Kurdish provinces are known for their rich culture and special originality. Like other Iranian tribes, they use a complete, rich, and mixed coverage of art and culture. In Kurdish areas, fortunately, they still wear their traditional clothes, even in urban areas. Of course, there were differences in the appearance of Kurdish clothes in different cities. Of course, the common point of all these clothes is their simplicity. Kurdish clothes consist of different parts, each of which has a specific application. Most men wear baggy pants called “Patul” and they wear different torsos called “Chukheh” and “Maleki”. They wrap a cloth called “Dastar” on their head or put a hat called “Pich Vakolav” with beautiful patterns on it. The clothing of the women of this region is also very covered and shows their original culture. Women often wear baggy silk pants called jafi. They tie a shawl around their waists and wear a torso called a “klanjeh”. They wear a long scarf called a “kalka” or a hat called a “klav”. One of the striking features of Kurdish clothes is their cheerful and attractive colors.

The clothes of the Bakhtiari and Lor peoples have been a sign of their masculinity and zeal for a long time. The Bakhtiari people, even in urban areas, still wear their ancient clothes and consider this clothing an honor for themselves. Bakhtiari men wear a black felt hat that is completely round and made of high quality felt. The top called “Chogha” which is woven from goat hair is the clothing of the men of this land. A long tunic that covers up to the knee. The material of this cover is such that it can be used in winter and summer and rain does not penetrate into it. “Debit” is the name of the baggy pants that men wear. They put on a fine fabric and tie a shawl around their waists. Women also wear a hat called “Lachak” on their head and wear a long scarf called “Mina” on it. They wear a handkerchief with a closed forehead and a long-sleeved shirt. They wear a long velvet skirt that covers the lower part of women’s bodies called “village pants” on their shirts.

In the south of Iran and the province of “Khuzestan” due to the oppressive heat of the weather, a different coverage can be seen from other regions. Khuzestani men wear a long, often white dress that extends to the ankles called “Dishdasha”. Of course, there are differences in the appearance of the Dishdasha, the Dishdashawith and without the collar. Cotton woolen garments called “khachieh” or “basht” are also worn on the Dishdasha. This robe, which has beautiful embroidered collars, is popular among men and can be seen in different colors. To protect the head, neck and face, they put a long cloth called “chafeeh” on their head. Chefieh is available in white, black and green. A thick woven cotton ring called “aqal” is placed on the head and head and holds the head on the head. The “abaya” or “robe” is a free black chador with two sleeve-like incisions on either side. This chador is widely used among Khuzestani women. A large scarf called “Sheila” can be seen in the clothing of Khuzestani women. This scarf, which is very thin and often has a silky cheek, is a cover to cover the head and chest.

The vast province of Sistan and Baluchestan is located in the east and southeast of Iran. One of the differences in the coverage of this region is the high cost of women’s clothing in this country. Baluchi men in this province wear a loose shirt called “Jamg”. Pants called “Pajamg” are also considered as men’s underwear. They cover their heads with a turban-shaped cloth called “pak” or “masr”. A cloth called “lang” is wrapped around his neck and a belt called “serinband” is wrapped around his pants. The difference in women’s clothing in this region compared to other parts of Iran is quite noticeable. The different and cheerful colors used in them show their taste, spirit and art. The women of this region use “Jamg” and “Pajamg” very delicately to cover themselves. They wear a cloth called “serig” or “teko” on their head. They hangs all kinds of ornaments such as “kig” and sequins on his clothes, which gives an eye-catching beauty to their clothes.

Turkmen are an ethnic group living in northern Iran. The traditional clothes of these people, which have been used for many years, are of different types, like other tribes. Turkmen men wear a knee-length robe called “don”, which is available in a variety of colors, including red and yellow. “Chakman” is also a cloak made of camel hair. In the cold seasons of the year, they use a dress called “Ichmak”. The skins of various animals are used to sew “ichmak”. Turkmen men wear very beautiful and different hats on their heads, such as “Dumeh Talpak” and “Bukhar Talpak”, which is the most famous. Turkmen women, like other ethnic groups in Iran, have always chosen happy and beautiful colors for their clothes. They wear very beautiful and large silk shirts, which are red in color, called “Konik red”. They wear an overcoat called “Chabit” on their shirt. Beautiful embroidery on Turkmen clothes is eye-catching. The position of jewelry is very evident among Turkmen women.