Islam is a creative, monotheistic and Abrahamic religion. Followers of Islam are called “Muslims”. Islam currently ranks second in the world in terms of ideological followers, with an official number of 1.8 billion followers, after the Christian population and before atheists. Muslims believe that God gave the Qur’an to Muhammad, the “Prophet of Islam,” through an angel named Gabriel. According to Muslims, Islam is the most perfect religion in the world and God sent revelation to many prophets and Muhammad is the last of them. Muslims consider Muhammad to be the “restorer” of the pure monotheistic faith of Abraham, Moses, Jesus, and other prophets, and they believe that Islam is the most perfect and last divine religion.

Worship means the ultimate bow and strain against the one who deserves it, and no one deserves worship except God, the One and Creator of the universe. In the Quran and hadiths, works such as forgiveness of sins, peace and happiness of man, increase of sustenance, Imamate, nearness to God and firmness in religion are mentioned for worship. Apart from the fact that some Islamic worships are jointly and collectively, Islam has also shaped individual worships in such a way that it involves performing some of the duties of life. According to Islam, any good and useful deed, if it is accompanied by a pure divine motive, is worship. Therefore, studying, working and earning, socializing if it is for God and in the way of God, is worship. Hence, Muslims try to keep the remembrance of God alive in their hearts and minds by wearing religious ornaments, reading religious books and hadiths, or mourning. For example, the hadiths of many Shiite Imams and Imams have been narrated in order to wear or use some stones as a ring during prayers or the clothes of the worshiper, or to use the soil of Karbala to prostrate during praying, which in addition to forgiving sins, they also will increase the reward of prayer, which has worldly and otherworldly effects.  Perfume and use a pleasant scent is the tradition of the Prophet (PBUH) and the Imams of the Infallibles (AS). These nobles advised people to use fragrant, and there are many virtues and properties for fragrant according to narrations. 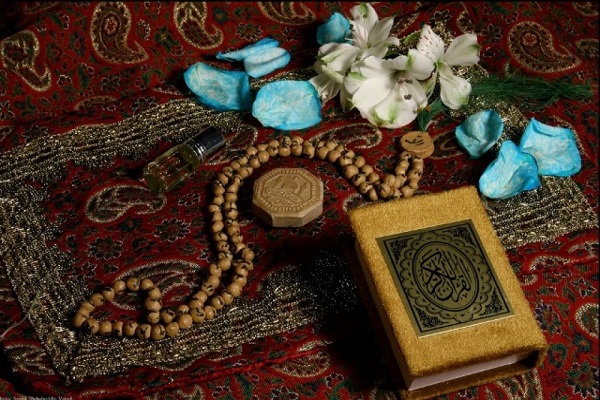 Properties of Stones & Rings according to Islam

God has revealed certain stones with unique properties and it is recommended that precious stones be associated with the finger, which is why most of the rings are open under the jewel, which makes the rays of gem and properties penetrates through the skin and enables the body to use the unique energies and properties that each ornamental stone has. While some believe that these stones help you in your daily life, others believe that they are most beneficial to you when you pray with them. Otherwise, you will not feel the full benefits of the stone. However, if your gem is not original, the stone can not benefit you!

Ruby is known as the master of all stones, so it is known as one of the most expensive gems. It is believed that this stone has many benefits such as dignity and beauty, and also helps the wearer against grief and brings consumer safety. But because of its high cost, a ruby ring is not worn as much as an agate and turquoise ring. According to ancient texts, the depth of the ruby color changes according to the health of the wearer. According to Islam, the ruby ring prevents anemia and helps treat blood diseases. It also helps the wearer of the ring against danger through the senses and helps to improve vision just by looking at it. Imam Ja’far Sadegh (AS) has quoted from Amir al-Mu’minin: Ruby “removes poverty and tension”. According to the ninth Imam, Imam Javad (AS) “stops worries” by wearing a ruby ring and according to the eighth Imam, Imam Reza (AS), “ruby eases the problem”

The most common ring is the agate ring. Because it is easily made in many countries and is one of the cheapest gems, agate is widely used in other religions such as Hinduism and Sikhism and is believed to have various properties, one of which is to protect the wearer from misfortune and enemies. The best type of agate is from Yemen, which is expensive and difficult to find. However, the main agate rings can be purchased from Iran, Iraq, Syria and Lebanon. Properties of agate ring from Islamic point of view are Happiness in the heart, Eliminates sadness and anger, Gives a feeling of strength and courage & Black agate protects children from the eyes of jealousy.

Not only is agate used for rings, but it is also used as rosary beads, as Imam Musa Kazem (AS) said that “using agate rosary has many rewards.”

The turquoise ring is also commonly worn in many cultures because it is believed that victory and divine help are given to the wearer. This gem is covered by many Muslims as well as non-Muslims from areas such as India, Pakistan and Iraq. Turquoise is a fragile stone, which means you have to be careful when wearing it. The best turquoise is sky blue, which is one of the famous stones in Iran. Properties of turquoise ring from the Islamic point of view are Protects against magic and the evil eye & Protects against heart problems, malaria and depression. Quoted from Imam Ja’far Sadegh (AS): “The hands that turquoise wears do not see poverty.” The Holy Prophet (PBUH) said that “God does not leave the prayer of one who wears turquoise unanswered.” Imam Sadegh (AS) has narrated: “A hand with a turquoise ring that is raised in prayer is dearer to God than any other hand.” 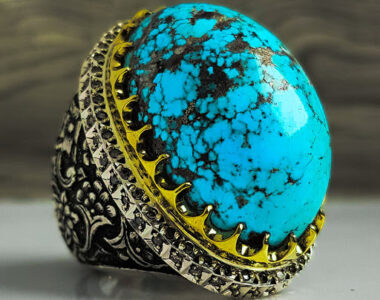 For Hadid gem and Hadid ring, it is said that you do not need to always wear it and it is recommended that you do not wear it for too long. It is more recommended that you wear a hadid ring if you are pessimistic about a subject or environment. Properties of Hadid ring from Islam point of view are Keep the devil away, Self-esteem, Self Confidence & Creates focus. Some sources say that Imam Ali (as) wore it when he entered the war. According to Imam Sadegh (AS), Durr-e-Najaf stone gives happiness and ease of work to the user, and Hadid is usually covered to strengthen and overcome your enemies. If you are afraid of slander, this stone should also be covered because this stone keeps the devil away. However, these two stones are not as popular as many other stones. This is because they are not easy to find and buy. The Durr-e-Najaf stone is found only in Najaf, Iraq and is not easily accessible.

We are pleased to present to you a beautiful line of gifts that are exclusively designed for Muslims. These items reflect the blessing it is to live a life of faith, and remind us of the graces which God lavishly bestows on us every day.

How To Brew Persian (Iranian) Tea At Home