Minakari or Enamelling is an art that has a history of about five thousand years and is considered a handicraft. Today, this art is mostly done on copper, but it can also be done on gold, silver, and pottery. In the first article we talked about Persian (Iranian) MinaKari, but in this article we want to explain more about this art.

Professor Pope Wrote in his book “Siri in Iranian Art” about Iranian Minakari: “Minakari is the brilliant art of fire and soil with baked and bright colors.” The art of Minakari painting reached its peak in the Safavid period in Iran and continues to this day. The history of Minakari in Iran dates back to the Parthian and Sassanid eras, but its use from the beginning of Islam until before the Mongol patriarchy is not clear to us. In fact, this art may not be Iranian, but since it has evolved in Iran, it has become completely Iranian and today it is known in the eyes of the world as Iranian artists.

According to research, the history of Minakari back to ancient Rome. Because a part of the statue of Zeus is reported to be Minakari, it is one of the Seven Wonders and dates back to 450 BC.

Gold is the only metal that does not oxidize when enamel (Mina) melts, so it makes it possible to execute a design with as much detail and resemblance as possible on Minakari, while copper and silver enamels do not have this quality. 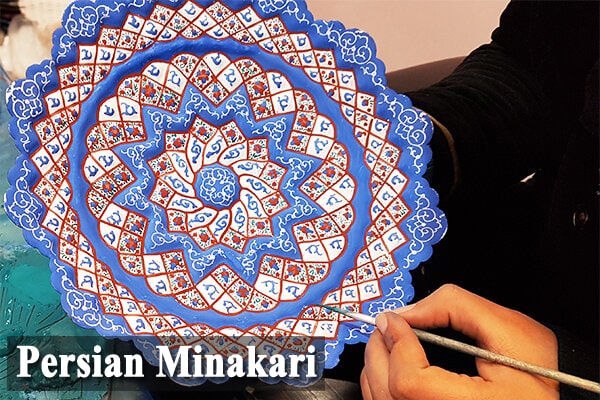 Minakari design with using different colors. The paints used for Minakari design are often refractory and made of metal oxide powder. In Iran, Minakari plates mostly designed with traditional designs such as paintings, flowers and birds, and so on.

Perhaps the best word to buy Minakari on the Internet is the word Minakari for Sale, but if you do not know what model of Minakari and with what quality you need, searching on the internet will not reach your goal and you may not be completely satisfied with your purchase. The best place to buy Persian Minakari dishes that are reasonably priced and quality is very important.

There are different types of Persian Minakari Plates and different prices can be considered for them depending on the type and location of texture. The Best place to buy Iranian Minakari if you are away from Iran and haven’t access to Persian Handicrafts Stores in Iran, is an online Persian Handicrafts store. Just like vintage furniture, there are actually a lot of vintage Persian Minakari online Shop online, if you know where to look. But one of the best online stores that selling Iranian Minakari is ShopiPersia.com website. Why ShopiPersia !!! ShopiPersia is the largest online Persian Handicrafts Shop from the public point and has been operating for almost 5 years. One of the key advantages of this website is the focus on customer satisfaction, which has been very important throughout this activity. ShopiPersia located exactly in Iran, Therefore, they offer carpets that can not be found in other online and offline galleries, and their Minakari collection is updated weekly and new Minakari are placed on their website. All of Minakari that offered at ShopiPersia are 100% Made in Iran.